BARRY SINGER (on The ARTs and Otherwise) 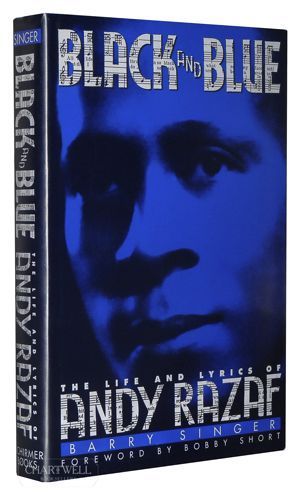 ~ A NEW YORK TIMES NOTABLE BOOK OF THE YEAR ~
The definitive biography of the greatest African-American lyricist of the 20th Century, the lyric-writing partner of Thomas "Fats" Waller and Eubie Blake, among many others, who wrote more than 800 songs, including such landmark standards as "Memories of You," "Honeysuckle Rose," "Ain't Misbehavin'" and "Black and Blue;" regarded by many as America's first racial protest song.

Born Andreamenentania Razafkeriefo, a descendant of the royal family of Madagascar, in 1895, Andy Razaf lived a life of All-American achievement obstructed and, in the end, oscured by race. He died, forgotten, in 1978.
Black and Blue rescues him from oblivion.

Originally published in 2003 as a comprehensive history of the last twenty-five years in musical theater, on and off Broadway, this new Ever After extends the narrative, taking readers from 2004 to the final moments before the lights went out on Broadway in 2020. It is, by default, the story of an era.