Barry Singer (on The ARTs and Otherwise) 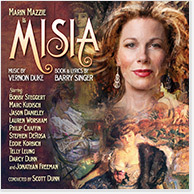 MISIA was brought to life after Barry Singer wrote an essay about Vernon Duke for the New York Times. The composer's widow, Kay Duke Ingalls, asked to meet with Singer and proceeded to hand him something she called "The French Score," a never-produced, unknown musical that Duke had written while living in Paris in 1949.

It was a tremendous discovery of a brilliant, lost Vernon Duke score. Duke's widow next suggested that Singer turn the work into a new musical about Misia Sert, who had, in fact, once introduced Vladimir Dukelsky (Duke's original name in Russian) to Diaghilev – who commissioned a ballet from the 23-year-old composer.

Singer drafted an entirely new book and new lyrics around the Vernon Duke score and was also given access to the rest of Duke's catalogue, including classical instrumental works written by Vladimir Dukelsky.

The result is a brand new Vernon Duke musical, featuring more than 20 never-before-heard Vernon Duke melodies, a number of Duke's less-well-known classical compositions and the full-length ballet that Duke originally wrote for the Ballet Russes.

MISIA received its world premiere as a staged reading at the Ravinia Festival in Chicago. It then received two staged readings in New York under the auspices of Jujamcyn Theaters, directed by Mark Lamos, before being released on CD by PS Classics.

Originally published in 2003 as a comprehensive history of the last twenty-five years in musical theater, on and off Broadway, this new EVER AFTER extends the narrative, taking readers from 2004 to the final moments before the lights went out on Broadway in 2020. It is, by default, the story of an era.